A Black woman and mother who was subject to police brutality and whose assault was caught on camera that eventually led to the dismissal of Metropolitan Police Constable James Kiddie, has been found dead in her cell at Holloway Prison London.

Her story is both tragic and shocking. As you read this desperate article I ask that you help get the truth out there.


Sarah was falsely arrested for shoplifting in London's Regent Street in November 2012. PC James Kiddie was caught on CCTV dragging Sarah by her hair while punching her repeatedly in the face.

Such was the ferocity of the attack a fellow Police Officer in attendance provided key witnessed evidence against Kiddie.

When the case came to court in March 2014 in a bizarre twist of justice the officer was charged with common assault rather than a more serious offence.
Later the family found out that PC Kiddie had real form. The officer was subject to a number of previous complaints one where he was found to have sprayed CS gas directly into the face of a number of UK Uncut tax avoidance demonstrators in 2011.
The Metropolitan  Police Service dismissed the compliant but that was later overturned by the findings of an IPCC investigation that recommended that PC Kiddie face a misconduct hearing. PC Kiddie was an accident waiting to happen.
Sarah had suffered mental health issues ever since the sudden death of her newborn baby in September 2003. After a period off illness, tragically her baby died. Bizarrely Sarah and child's father conveyed their deceased child from Beckton Children's Hospice to a Woolwich undertakers in a taxi.
It was a nightmare trip from which Sarah never recovered.  The horror of losing her child and the memory of that trip haunted her and the father continuously.  Throughout the  next 12 years she suffered periodically from bouts of severe mental ill-health. It was whilst a patient detained under Section 3 of Mental Health Act that her family says Sarah suffered a sexual assault in Maudsley hospital in October 2014. 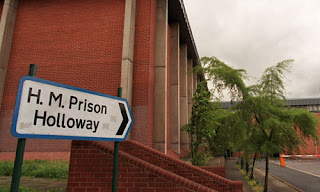 They told me Sarah had been a victim of an attempted rape whilst resident in Maudsley and that when she fought off her attacker, injuring him, the staff called the police. It was Sarah who ended up being arrested.


The fact that Sarah had previously challenged racist and violent Metropolitan Police Officer who was later sacked  leads the family to suspect that she was targeted for arrest under any pretence, as an act of retribution.
This in addition to the obvious fact that Sarah was clearly mentally ill meant that placing her  o remand in jail, without recourse to the medical help she clearly needed was an unforgivable act of brutality and cruelty. I am told that throughout her time on remand. sitting kin jail, Sarah never once received any medication.  This would have constituted a living hell for someone whose life had been marred with personal tragedy mental iil health and police brutality.
The Reed family received a phone call on the 11th January 2016 from Holloway Prison informing them that Sarah was dead. They were told that Sarah had 'strangled' herself whilst lying on her bed, which from all accounts appears an almost physical impossibility.
The prison requested the family attend the jail immediately however once they arrived they were refused their rights to see the body of Sarah. The prison authorities having asked them to come and identify Sarah's body, then refused to let them do so.

Once can only imagine the grief and pain of the family at being denied their last rights. They report being treated shoddily by the Prison staff who offered no comfort nor compassion treating the family in a hostile and aggressive manner.
This is the awful tragic life of a black woman who lost her newborn baby, becomes mentally ill and then falls victim to a horrendous police assault and an attempted rape. A black woman who was then wrongly arrested yet again, denied medical treatment and then was subsequently found dead in suspicious circumstances whilst lying on her bed in a prison cell,

This is a horrific tale of institutional racism, sexual violence , corruption and brutal incompetence/negligence that defies belief.
The family of Sarah Reed desperate to find out what happened have sought publicity from the mainstream press but have been told by the press told that the 'Ministry of Justice had instructed the press not to report'.

I was asked to ensure their story got out and after speaking with the family it is clear that this case is potentially explosive.
Sarah will be buried on Monday 8th February 2016 in a private family ceremony.
There are many more aspects of this case that will alarm and shock you. This is all that can be published for no. However I will be reporting more on this over the next couple of days.

The family of Sarah Reed have asked that the above is made public. You can help get her story out there.
Another one dead, nothing said. #SarahReed #SayHerName #BlackLivesMatter